The New Map of Entrepreneurship and Venture Capital

Great report with Foreword By Brad Feld –  “In 2012, I detailed my experiences as a leader in the Boulder, Colorado startup community in the book Startup Communities: Building an Entrepreneurial Ecosystem in Your City. I moved to Boulder in 1995, and though I had no pre-existing business relationships, I found it to be a collaborative and inclusive place where connections could easily be made—something that was critical for me as a young entrepreneur. I’ve since invested in or helped build hundreds of companies in Boulder, including Foundry Group and Techstars.”  There is more in the report, click on the image. 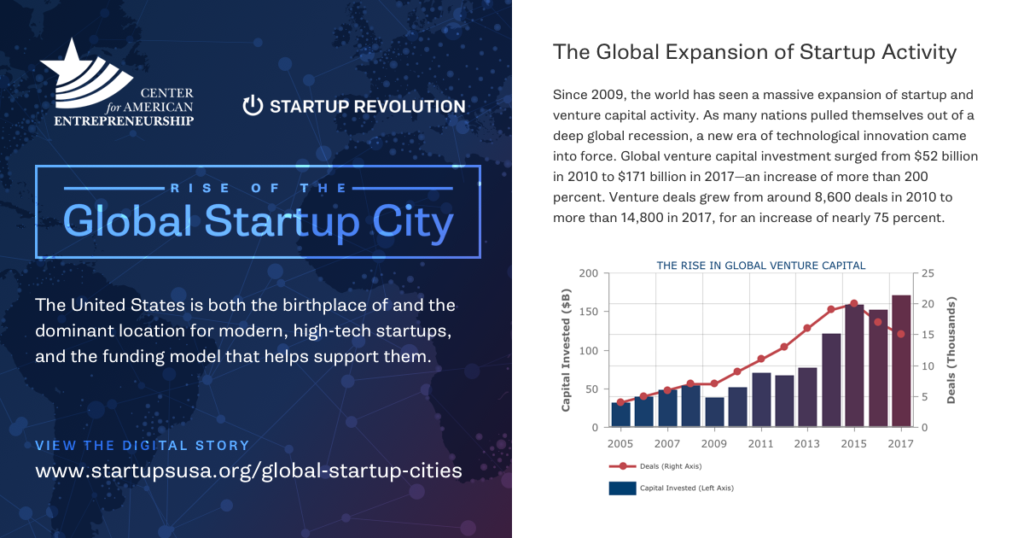 This report has examined the new global geography of global startup hubs. To do so, we analyzed detailed data for more than 100,000 venture capital deals spanning more than 300 global cities and metropolitan areas across 60 countries from 2005-2017. Our research informs several key findings.

Second, the globalization of startup activity has largely been a local, urban phenomenon, powered by the rise of significant startup hubs outside the U.S. The San Francisco Bay Area remains, by far, the world’s dominant location for startup activity, capturing roughly a fifth of global venture capital investment. But a number of cities across the world have developed into leading startup hubs, including London, Berlin, Paris, and Stockholm in Europe; Beijing and Shanghai in China; Bangalore, Delhi, and Mumbai in India; and Singapore and Tel Aviv.

There are more recommendations in the report. Click on the image for the complete report.