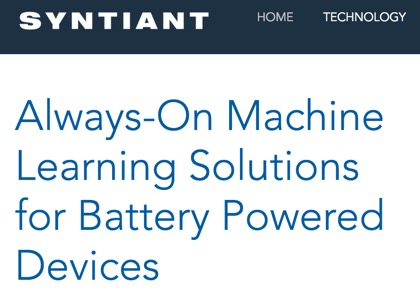 Thanks to EE Times

The $25 million Series B funding round — which led by M12 (formerly known as Microsoft Ventures) — brings to just over $30 million the amount raised so far by Syntiant, an Irvine, Calif.-based chip startup founded last year.

Syntiant is currently sampling its first product, a microwatt level chip that the company refers to as a neural decision processor (NPD). Syntiant says it delivers about 50 times improvement in efficiency versus traditional digital stored-program architectures.

“We are super excited to be working with some of the world’s greatest companies,” said Kurt Busch, Syntiant’s CEO, in an interview with EE Times. Busch said Syntiant views the investors as great partners that are highly motivated to accelerate the advancement of machine learning.

Busch said Syntiant would use the new funding to commercialize its initial product and begin work on its second-generation chip, which will broaden the application of Syntiant’s technology to include video. That chip, a a 20 tera-operations/watt NPD, is scheduled to begin sampling in the first half of next year.