After two years in stealth, Spatial is launching its augmented reality collaboration platform that enables a kind of holographic teleportation through AR. It turns any room into a 3D workspace, and it has enabled Spatial to raise $8 million in venture capital funding.

With Spatial, users connect remotely and express ideas using lifelike avatars. They can also combine demonstrations of things that exist in physical space, as well as things that exist only in digital realms. AR glasses maker Magic Leap referred to this as spatial computing.

Spatial runs on various AR headsets, including Microsoft HoloLens. It enables a new way of working together and, if Spatial executives on its mission, could eliminate the need for video conferencing and reduce work travel.

Features include:
● Remote presence: Feel like local and remote participants are in the same room with lifelike avatars.
● Infinite workspace: Extend your workspace beyond the screen and seamlessly tie together content from all digital devices into an infinite space.
● Collective knowledge work: Quickly visualize thoughts and ideas using Spatial’s
voice-driven 3D web browser.
● Accessible anywhere: Spatial works best with augmented or virtual reality headsets, but is also accessible via web and mobile browser.

Spatial’s cross-reality platform is being piloted by Ford X, a new incubator formed by Ford to unify its product teams working on mobility initiatives. 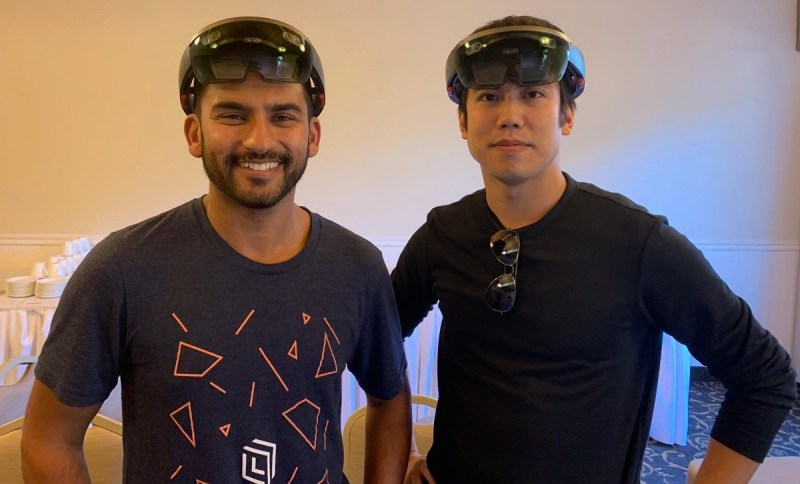 “Spatial has built the most advanced augmented reality platform available today,” said Todd Simpson, partner at iNovia Capital. “This is game-changing technology that will undoubtedly advance the future of work, and more broadly, the future of computing.”

Spatial was founded by serial entrepreneurs and award-winning designers Anand Agarawala and Jinha Lee following the success of previous 3D and AR user interface projects. Agarawala founded BumpTop, which was acquired by Google in 2010, and Lee introduced pioneering AR computer SpaceTop at TED in 2013.

“AR makes the experience better, as we can make remote people feel like they are in the same room,” said CEO Agarawala, in an interview with VentureBeat. “We chose AR first as a company, instead of virtual reality.”

Above: Spatial uses realistic still images as avatars for people.

I tried out a demo of the tech with a Microsoft HoloLens headset. You can take a work screen from a computer and put it on a wall. Others can view it on that wall and contribute their own things to the overall animated digital image.

It was hard to see the whole wall, however, because the HoloLens has a very limited field of view. Over time, Agarawala said the experience will get better and more precise.

As for the application, Agarawala said, “We see a lot of people centralized in one place with a few people in remote locations. Those remote people can feel more like they are a part of the meeting.”