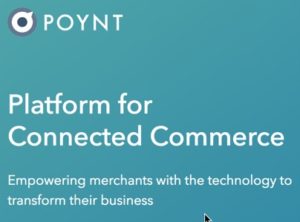 Poynt today announced a $100 million Series C raise, including strategic partners Elavon and National Australia Bank (NAB). With this investment, the company will expand into new markets across Asia, Europe and South America, grow its talent base, and invest in product and partner development as it executes its vision to become the operating system (OS) on smart payment terminals worldwide.

According to The World Bank, global world product is expected to exceed $85 trillion this year, with more than $22 trillion occurring on payment cards. More than 176 million payment terminals are expected to ship by 2020. Common standards create huge new markets. In the same way iOS and Android drove smartphone ubiquity and transformed mobile into a $3 trillion market, Poynt now aims to transform commerce with an open OS for any smart payment terminal, on every store countertop in the world.

Poynt OS creates a new app economy for merchants by allowing developers to write once and distribute everywhere. Based on Android, it is hardware-agnostic and seamlessly plugs into new and legacy retail software systems, allowing merchants to extend their capabilities with third party and custom apps. The company expects Poynt OS adoption on at least half of the world’s top payment terminal manufacturers in 2019.

“Smartphones changed the way we search, buy and communicate — not only because the hardware was beautiful, but because iOS and Android transformed a ubiquitous utility into a platform for innovation where developers could build once and distribute everywhere,” said Osama Bedier, founder and CEO of Poynt. “Our vision is to transform retail by becoming that innovation platform for payment terminals everywhere. We give developers a technical canvas to build the experiences merchants and their customers have come to expect – and ultimately, make visiting your local store the personal experience it was always meant to be.”

Recognizing the lack of smart terminals in the market, Poynt has invested five years of research and development to reimagine the ubiquitous payment terminal into a connected, multi-purpose device that runs on an open platform. The company has experienced rapid growth, shipping nearly 150,000 terminals in the last 16 months. Nearly 30 million consumers have transacted on a Poynt terminal, and total payment volume is expected to exceed $25 billion over the next 12 months. Poynt has signed partnerships with leading global banks including Elavon (U.S. Bank), Evertec, Worldpay, J.P. Morgan Chase, Itau Unibanco, Alipay, Nexi, EVO, and Mashreq Bank. Today, approximately 8,000 developers build on Poynt, including Boomtown, Homebase, MindBody, Talech and TruRating.

“Elavon has been a leader in payment processing for over 20 years because of our dedication to helping our customers grow by providing some of the most innovative payments technology on the market,” said Jamie Walker, CEO of Elavon. “We have a strong and trusted partnership with Poynt, and we are excited to support this next phase of the company’s growth.”

“We’ve been very impressed with the caliber of the team at Poynt and the innovation of their smart payment terminals,” said Melissa Widner, General Partner, NAB Ventures. “As Australia’s largest business bank with a large merchant customer base, NAB is always looking at new initiatives that are coming into the market and assessing whether they could help us provide improved experiences to our customers.”

Poynt is a connected commerce platform empowering merchants with the technology to transform their businesses. In 2013, the company recognized the lack of smart terminals in the market, and it re-imagined the ubiquitous payment terminal into a connected, multi-purpose device that runs third-party apps. As smart terminals become mainstream, Poynt OS is an open operating system that can power any smart payment terminal worldwide, creating a new app economy for merchants and allowing developers to write once and distribute everywhere. Poynt is headquartered in Palo Alto, Calif., with international headquarters in Singapore, and is backed by Elavon, Google Ventures, Matrix Partners, National Australia Bank, NYCA Partners, Oak HC/FT Partners, Stanford-StartX Fund, and Webb Investment Network. Find out more at poynt.com.