Thanks to Venture Beat 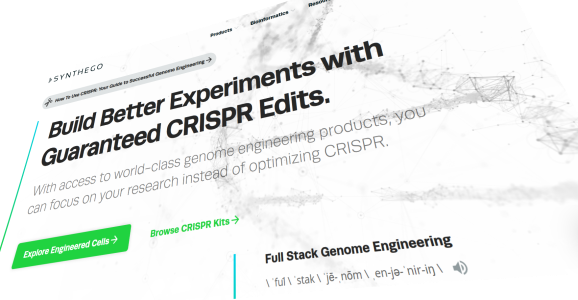 Genome engineering company Synthego has raised $110 million in a series C round of funding led by Peter Thiel’s Founders Fund, with participation from 8VC and Menlo Ventures.

Founded in 2012 by brothers and former SpaceX design and engineering staff Paul and Michael Dabrowski, Synthego is setting out to accelerate CRISPR research, a genome engineering technique that could help cure genetic diseases … or even bring back woolly mammoths from extinction.

The mechanism behind CRISPR, which stands for Clustered Regularly Interspaced Short Palindromic Repeat, occurs naturally in organisms when bacteria protect themselves from viruses by stealing parts of the viral DNA to mix with their own to create new genetic sequences that can prevent future invasions.

Scientists effectively harnessed the CRISPR process and transformed it into a gene-editing tool, allowing them to replace, remove, or add to any DNA sequence within a genome. Thus, flawed and disease-prone genes can be altered.

But getting to that point still requires a lot of R&D spade work, which is where Synthego comes into play. The Redwood City-based company essentially builds the foundation for making the R&D and validation process easier for scientists. Using automation, machine learning, and bioinformatics, its platform serves up access to “engineered cells with guaranteed edits in their desired target,” according to a statement issued by the company.

Through its Engineered Cells product, researchers can order a cell modified with CRISPR – this means that the specific gene that they wish to experiment with is dispatched to their lab pre-edited within weeks. In real terms, it helps researchers optimize time and resources they expend on gene therapy experiments, and they can get to work much quicker.

“Our vision is a future where cell and gene therapies are ultimately as accessible as vaccines, so that everyone can benefit from next-generation cures,” Synthego cofounder and CEO Paul Dabrowski said. “Synthego will continue to innovate to help researchers redefine the boundaries of transformative medicines.”

Prior to now, Synthego had raised around $50 million in funding, and with another chunk of cash in the bank, it said that it plans to expand its platform and work toward expediting gene therapy experiments and ultimately decreasing the cost of gene therapy.

That Founders Fund is leading this round is notable, and not entirely surprising. Peter Thiel, among a number of otherSilicon Valley heavyweights, has been investing in biotechnology breakthroughs for some time with the ultimate aim of slowing — or even halting — the aging process. Thiel founded Breakout Labs back in 2012 for the sole purpose of providing grants to very early-stage speculative scientific research, for example, and Synthego’s raison d’être fits that broader mission.

“CRISPR may prove to be the most important scientific breakthrough of the last decade, but we must develop valuable, non-obvious applications to fulfill its potential,” Thiel said. “Synthego’s platform is already enabling new genomic research and pharmaceutical development and will ultimately unlock the full potential of genome engineering.”