Oura Health, a sleep-tracking and sleep-improvement platform, just raised $20 million in a funding round led by MSD Capital with participation from YouTube co-founder Steve Chen, Twitch co-founder Kevin Lin, Sunrise founder Dave Morin, JUMP founder Ryan Rzepecki and others. This round comes a couple of years after the Finnish company raised €5 million from MIT Media Lab Director Joi Ito and others. 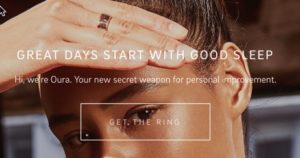 Oura is a smart ring that tracks your sleep habits to help you achieve better sleep. It does this by measuring the blood volume pulse from your finger’s palmar arteries, detecting the direction and intensity of your body’s movements using a 3D accelerometer and gyroscope to detect direction and by measuring your temperature through three NTC temperature sensors.

“I believe Oura has identified a challenge that faces us all, namely getting enough high-quality sleep,” Michael Dell of MSD Capital said in a statement. “Oura’s design and technology show tremendous craftsmanship, and now more consumers around the world will be able to get their own Ouraring.”

“We are thrilled to have such a talented group of builders, champions, and creators join us as investors,” Oura Health CEO Harpreet Rai said in a statement. “It’s amazing to see how such a diverse group of investors all recognize the universal importance of sleep.”

To be clear, sleep tracking and improvement is an area many startups and large companies have tried. You may remember Basis Health, which eventually sold to Intel. And then there’s Fitbit, smart ring Motiv  and other wearables that track your sleep.

We have yet to try this out, but we’ll report back if we do. Oura Health is currently shipping to more than 100 countries and retails from $299-$999, depending on the material you select. Meanwhile, Motiv retails for $199.