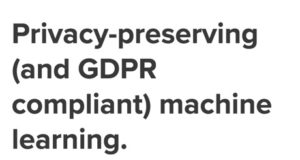 JPMorgan Chase & Co. has invested in a startup whose technology can analyze an encrypted dataset without revealing its contents, which could be “materially useful” for the company and its clients, said Samik Chandarana, head of data analytics for the Corporate and Investment Bank division.

The banking giant recently led a $10 million Series A funding round in the data security and analytics startup, Inpher Inc., headquartered in New York and Switzerland. JPMorgan could use the ‘secret computing’ technology to analyze a customer’s proprietary data on their behalf, using artificial intelligence algorithms without sacrificing privacy, Mr. Chandarana said.

“This gives us a technological solution to be able to act on a client’s private data … without them having to worry about the security constraints or giving up all their information to us,” he said.

ING Belgium, a subsidiary of ING Groep NV, also is experimenting with how the technology could allow for the sharing of encrypted databetween a bank and a telephone company, or a bank and a retail company — organizations that would not typically share data and could develop new products together.

One of the technological methods Inpher uses, called fully homomorphic encryption, allows for computations to be conducted on encrypted data, said Jordan Brandt, co-founder and CEO of the company. It’s the ability to perform analytics and machine learning on cipher text, which is plain, readable text that has been encrypted using a specific algorithm, or a cipher, so that it becomes unintelligible.

Analyzing encrypted information without revealing any secret information is known as zero-knowledge computing and it means that organizations could share confidential information to gather more useful insights on larger datasets, Dr. Brandt said. Total funding for the startup is $14 million to date.

Inpher’s technology could be a core component in an experimental project called Roar, which would allow clients in industries such as pharmaceuticals, airlines and logistics to crowdsource economic and market-based predictions based on crowdsourced data, potentially combined with their own private data, Mr. Chandarana said.

For example, Inpher’s technology could be useful if financial modelers outside of JPMorgan want to compute on a wider set of data, from other sources, to come up with predictions on, say, trading volumes of various products or the next set of bond trades, he said.

“This allows the modelers to keep their models secret and the data to have its own privacy,” he said.

The secret computing technology could also be useful in portfolio analytics, where customers use JPMorgan’s analytic tools to get insights on risk factors about stocks, bonds and other financial assets, Mr. Chandarana said.

Many JPMorgan customers house portfolios with multiple custodian banks. Inpher’s technology could allow customers, in industries such as those, to conduct portfolio analysis using JPMorgan tools on wider datasets including those outside of JPMorgan.

“It’s significantly easier for them to get a concise, consistent set of analytics across their whole portfolios without us seeing all of the other portfolios,” he said.

JPMorgan is testing the technology’s capabilities on its own internal datasets and expects to deploy it for customers within the next year. “We’re not making investments for a 5-year period. This is stuff we’re working on live now,” Mr. Chandarana said.