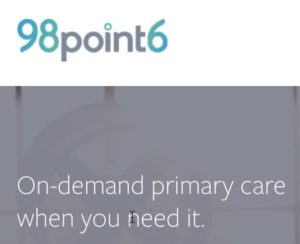 The new funds, announced Tuesday morning, bring the company’s total raised to a whopping $86.3 million in just over three years.

“The round itself is a reflection of our execution to date and the momentum that we’ve built,” said longtime Seattle entrepreneur Robbie Cape, 98point6 CEO and co-founder, in an interview with GeekWire. “What it enables is all of the growth that’s coming as a result of that momentum.”

98point6 offers an entirely virtual primary care service, essentially offering all the services of your average doctor’s office through an app and website. Patients can do things like request a refill, ask a simple health question or have a problem diagnosed, all without leaving the couch (or their desk, or the line at the grocery store).

“We are focused on solving the primary care crisis in America,” Cape said in a previous interview, explaining that the idea for 98point6 initially grew out of a severe shortage of primary care physicians. “On the demand and supply front, we’re literally killing our population. It’s phenomenal. We are attempting to solve that problem by marrying deep technology with stellar medicine.”

The company augments both the doctor and the patient experience with technology including AI-fueled chatbots, cutting down the amount of time a physician needs to spend with each patient. Patients pay a yearly fee of $20 for unlimited access to the service

The service is currently available in 38 states and plans to expand to the rest of the U.S. later this year, Cape said, an expansion that the new funding will enable.

He also said the company is planning to grow its staff, including hiring a number of physicians across the U.S. 98point6 currently employs 122 people, including 15 physicians, who are almost entirely based out of its Seattle headquarters. Cape says it plans to hire new doctors on the East Coast and in Hawaii so the service can expand to 24 hours a day.

We are focused on solving the primary care crisis in America.

Cape said the company’s success securing investment is the same reason it is appealing to its customers.

“The thing that investors are reacting to, by virtue of their excitement in 98point6, is the value proposition we’re making to self-insured employers and to patients,” he said. That value proposition ticks three boxes, Cape said: High-quality care that is easily accessible and comes at a very low price.

Current 98point6 clients include Seattle Children’s Hospital and Aegis Living, who pay for their employees to use the service.

Cape said Goldman Sachs’ involvement is an exciting moment for the company, one it has been building towards.

“Primary care is the main entry point for individuals into an increasingly complex healthcare system, making it the ideal setting for providing patient education, encouraging preventive care and controlling downstream costs,” said Jo Natauri, the global head of healthcare investing at Goldman Sachs, in a statement announcing the investment.

“We are excited to partner with 98point6 because they are dedicated to improving the physician and patient experience—empowering board-certified physicians with technology to enhance care delivery and drive patient engagement,” she said.