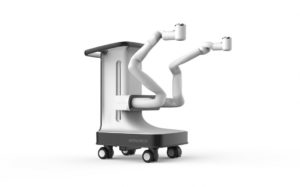 Auris Health has already received regulatory clearance to sell its medical robot in the U.S. Now it has $220 million in funding to help it place the technology in the hands of surgeons.

The latest investment, which the company calls “growth financing,” was led by Partner Fund Management. Redwood City, CA-based Auris says it will use the capital to commercialize its medical robot platform, called Monarch.

Auris developed its robotic technology for endoscopy, procedures that use slender, flexible instruments that clinicians insert into the body to examine tissues and organs. Auris’s robot does not perform these medical procedures on its own. Rather, the platform uses robotics and software that the company says helps clinicians perform procedures by accessing hard-to-reach parts of the body.

The hand-held controller that surgeons use to navigate Monarch resembles a video game controller. Auris says its technology enables a surgeon to steer an endoscope with greater precision. In March, the FDA cleared the Auris device for diagnosing and treating the lungs. The company has said that the first target for its technology is lung cancer. Auris says Monarch had a limited launch earlier this year and the company is now moving into full commercialization of the product. The company is selling its robot directly to hospitals via its own sales force. Monarch sells for $500,000, and the platform generates additional revenue from instrument sales based on use of the technology, as well as service agreements. In addition to supporting commercialization of its medical robot, Auris says it will also use the new capital to develop its technology for more procedures. The company has not disclosed what procedures or diseases it is targeting.

Auris was founded by Frederic Moll, a medical robotics pioneer who had previously co-founded surgical robot giant Intuitive Surgical (NASDAQ: ISRG), among other medical technology companies. Here’s more on the origins of Auris, which was formerly known as Auris Surgical Robots.