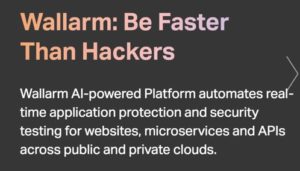 The $8 million deal was led by Toba Capital; Partech, Gagarin Capital, and Y Combinator participated in the round. This new deal brings Wallarm’s total funding to $10.8 million, according to the company and Crunchbase data.

In addition to funding, the company said it’s nearly doubled the number of customers it serves in the past year. Wallarm says it grew recurring revenue by 100 percent, year-on-year, in Q3 2018 as well.

Commenting on the new funding, Wallarm co-founding CEO Ivan Novikov observed in a statement from the company that, “Many companies in Silicon Valley strive to raise vast sums of money, but strategically, we’ve decided to only raise what we need and fund the rest of our growth organically.”

The company’s last funding came by way of a Partech-led $2.3 million venture round announced in December 2016. At the time, the company told TechCrunch that it became profitable during Summer 2016. A representative from the company said the company has fluctuated in and out of profitability since then. Because Wallarm is taking on sales and marketing staff, the business loses money today, but hopes to return to profitability shortly.

As part of the Series A transaction, a number of individuals will be joining the company’s executive team and its various boards. Speaking of sales and marketing: Johan Nordstrom, a former executive at Imperva and Arbor Networks will join Wallarm as its chief business development officer and HyTrust cofounder Renata Budko joined as chief marketing officer.

On the board side: Rajan Aggarwal, a partner at Toba Capital, will join the company’s board of directors. Reza Malekzadeh of Partech will join as a board observer. Wallarm is also beefing up its advisory board with the addition of two folks: LendingClub CISO Richard Seiersen and Randy Bias, who serves as Juniper Networks’s VP of technology and strategy.

In a statement provided to Crunchbase News, the company said it will use the proceeds from this round to accelerate its deployment into Fortune 1000 companies and to roll out its new FAST toolkit. Wellarm’s Framework For Automatic Security Testing (FAST) fits into companies’ existing continuous integration (CI) or continuous deployment (CD) infrastructure and lets security researchers, developers, and quality assurance professionals generate hundreds of security tests to locate and reproduce vulnerabilities in application code using a simple scripting interface.

In a June 2018 profile of the company and its technology, Forbes quoted CEO Novikov about its toolkit: “Wallarm FAST takes existing manual or automated tests, like Selenium, and uses those as a basis for generating all the possible security tests out there. Security teams can then create a policy to chip off everything that doesn’t belong. The resulting set of tests runs automatically, making a great addition to the release acceptance criteria.”

Apart from FAST, Wallarm offers a web application firewallproduct that doesn’t require manual configuration of threat detection rules. It’s a product sold to CEOs, said Novikov. FAST, on the other hand, is a product marketed to and priced for front-line engineering and QA teams.

Novikov admitted it’s a bit unusual for a startup to have two products in the market at once. Novikov said both pieces of software are built around the same core engine. “If it weren’t, we’d have to hire a dozen engineers for each product,” said the chief executive of the 55-person company. Wallarm’s built-from-scratch technology is flexible and extensible, allowing the company to slide into other market verticals like network and endpoint security.

The application security market is consolidating rapidly. On October 10th, publicly-traded application security firm Imperva, the market leader, sold to Thoma Bravo for $2.1 billion. And, one week ago, app firewall company tCell announced its sale to Rapid7 for an undisclosed sum. Novikov told Crunchbase News that he’s fended off four acquisition attempts in the past two years.

Wallarm is an example of the other approach to raising venture funding. Rather than chasing vanity valuations or attention-grabbing fundraising figures, the company is trying to use its own financial momentum to expand. Now five years old, Wellarm was founded in 2013 by a group of former white hat hackers who previously worked with Russian companies like Yandex and Mail.ru identify and mitigate security threats. The company and participated in Y Combinator’s Summer 2016 batch.

Instead of raising and torching countless millions in VC money in the name of moving fast and breaking budgets, Wellarm took its time to mature into an actual business, which is a lot more than one can say about many companies in the Bay Area.