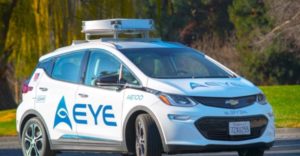 Thanks to VentureBeat – With some analysts predicting as many as 10 million self-driving cars will hit the road by 2030, it’s no wonder the lidar market is projected to be worth $1.8 billion in just five years. Lidar — sensors that measure the distance to target objects by illuminating them with laser light and measuring the reflected pulses — form the foundation of a number of autonomous car systems, including those from Waymo and Uber.

But not all lidars are created equal — or so argues AEye, a five-year-old San Francisco startup with an innovative sensor technology it claims can exceed the range and scan rate of traditional lidar. Today the startup announced a $40 million Series B funding round led by Taiwania Capital, with participation from heavy hitters like Intel Capital, Airbus Ventures, and Tyche Partners, in addition to undisclosed “multiple global automotive OEMs, Tier 1s, and Tier 2s” to be announced at the Consumer Electronics Show in January. This round brings AEye’s total raised to just over $61 million.

AEye cofounder and CEO Luis Dussan said the capital would be used to “scale AEye’s operations” and to meet global demand for its products in Europe, North America, and Asia.

“This funding marks an inflection point for AEye, as we scale our staff, partnerships, and investments to align with our customers’ roadmap to commercialization,” said Dussan. “Our strategic relationship with Taiwania will serve as a gateway to Asia, with valuable manufacturing, logistics, and technology resources that will accelerate our ability to address the needs of a global market. We intend to launch our next generation product at CES, which we believe will help OEMs and Tier 1s accelerate their products and services by delivering market-leading performance at the lowest cost.”

Altogether, AEye claims that the iDar system has 16 times greater coverage and 10 times the frame rate — up to 100 Hz — of competing sensors, plus 8 to 10 times the power efficiency. It’s also modular. Though iDar uses a custom-designed solid-state lidar system, its other components are off-the-shelf and “built for cost,” LaCorte said, which helped AEye keep the price tag under $3,000. (For comparison, lidar manufacturer Velodyne’s VLP-16 lidar starts at $4,000 and maxes out at a range of 100 meters.)

AEye has competition, of course. Israeli startup Innoviz Technologies raised $65 million in September 2017 for its lidar tech, following on the heels of funding rounds by Oryx and TetraVue. Luminar, which claims to have developed lidars with a range of more than 250 meters and a 120-degree field of view, recently announced a strategic partnership with Volvo. That’s not to mention far-infrared pioneer AdaSky, ground-penetrating radar startup WaveSense, and velocity-measuring sensor company Aeva, all of which seek to develop technologies that complement traditional vision-based autonomous car perception systems.